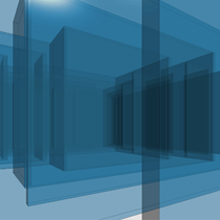 You are ten years old, visiting an amusement park with a group of friends for a birthday party. The group decides to go through a maze consisting of glass walls that circle and dead-end on a platform that constantly spins, obscuring any ability to sense the direction of the end in relation to the beginning. The experience begins as amusing and delightful –you experience a joyous sensation in not knowing where to go and everyone is having a great time together. There is a bitter-sweet timbre to the atmosphere as this is the last ride of the day before going home.

You decide to separate from the group for only a moment and find yourself alone staring at a dead-end path. In an attempt to reconnect with the group you are going in circles and are unable to find your way out of this recursive loop. You wonder if anyone has noticed you are missing, and if they are all going to leave without you. In a panic you run as hard as you can and became an unstoppable force colliding with an immovable object – a mirror wall. Another park visitor finds you and you follow the guide out of the maze.

Such is the nature of disorientation in architecture – depending on perspective of the user, the sensation can be delightful or terrifying. There is an element of appropriateness and user intent that plays into the outcome of the experience of disorientation. In the example above, disorientation was pleasurable when you did not have a time limit to achieve your goal, sensed security, understood the situation was temporary, and could communicate with others. Disorientation became unpleasant when you had a goal to achieve within a rigid time limit, lost a sense of security, perceived the situation as potentially permanent, and were unable to communicate with others.

In architecture, orientation has a positive connotation and is often employed by architects to assist in development of circulation, way finding, program layout, structure, envelope, and urban planning. Architects often avoid incorporating the counterpoint of disorientation , presupposing negative results on human comfort levels and imposed objectives in navigating space. However, not utilizing disorientation creates an imbalance and an architecture of sameness that results in its users existing on auto-pilot, checked-out of the immediate formally normative physical environment. This phenomenon is further exaggerated by the creeping of augmented reality into rituals of daily life, such as emails texts, calls, sms alerts, and app overlays as received through the iphone.

The goal of this thesis is to reground people in physical space and with each other through architecture – to create forms in space that allow for cross-pollination through interaction of multiple echelons of society. The intent is to create deviations from predictable spaces and rhythms for a common experience where navigation and understanding are a dependent, collective effort and a unifying societal force. This paper argues that architecture can help us connect with each other by employing a balance of orientation and disorientation, allowing us to come to know ourselves through each other and our sense of self in space. This thesis ultimately stresses that architects should never take for granted the importance of journey in conjunction with destination.

Architecture must think about the relationships between disorientation, connectedness and human interaction. To understand the issue of connectedness as it relates to architecture, it is necessary to introduce the concept of the building as a resource and tool in developing what psychologists refer to as communal sharing “the organization of interaction according to something socially meaningful that participants have in common.” (Cohen and Shinobu)

“Communal sharing operates when people take joint responsibility for something… when they share resources…or when they act with compassion because they identify with another.” (Cohen and Shinobu) Going through physical challenges also enhances the concept of communal sharing and creates new bonds for participants. Architecture has the potential as a public resource to heighten communal sharing by creating spaces that encourage co-dependently discovering space. To do so, the built environment would have to trend away from form following hyper-practical function and incorporating aspects of the surreal, and would also require redefining “the user” to “users”, plural.

“When people congregate they identify their own places in particular ways. In doing so they overlay a social geometry where they come together.” (Unwin) Architecture is able to form, transform, and react to overlays of social geometries in space, even if such social interventions are temporary. When architecture responds to sociality in space, the components transform from object to memorial and become filled with residual character “People arguing stand opposite each other, When they are friends they sit next to each other. Both can have architectural manifestations. There is a social geometry to the space of togetherness.” (Unwin)

To better understand how forming space affects sociality, we next examine orientation and disorientation to understand its intentional and unintentional physical, temporal and psychological states related to the individual and the collective. This review highlights orientation and disorientation as related to architecture for formal revelations and for a broader understanding of periodic contextual implications. Before we examine the phenomenon of human experience, it is important to note how we achieve a sense of direction, how in the vessel of our bodies our consciousness moves through portals in time through the universal feature or mere human construct of physical space. (Kolb and Whishaw)